Three YA releases in 2020 that I'm excited for

1) The Ballad of Songbirds and Snakes by Suzzanne Collins

This is probably the most widely anticipated book on my list as it's the upcoming prequel to The Hunger Games series. It's set around 50 years before the first novel in the series and follows Coriolanus Snow on his journey mentoring the female tribute from District 12. I'm also excited because I'm going to refresh my memory of the series by rereading all the past books.
To be released on 19th May.


2) Read With Pride by Lucy Powrie

Read With Pride is the second book in The Paper & Hearts Society series and I'm incredibly excited for it! The series is follows a group of teenagers in a book club and each book follows one of them. The first book is about Tabby Brown and deals with bullying, being a teenager in the digital age. Read With Pride is about Olivia and what happens when she starts up an underground LGBTQ+ bookclub.
To be released on 14th May.

3) Only Mostly Devastated by Sophie Gonzales

It's a queer reimagining of Grease. Need I say anymore?
To be released on March 3rd.

Thanks for reading! Tell me in the comment what releases you're looking forward to this year. 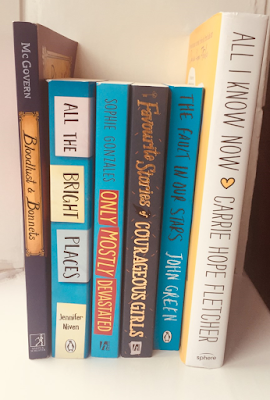